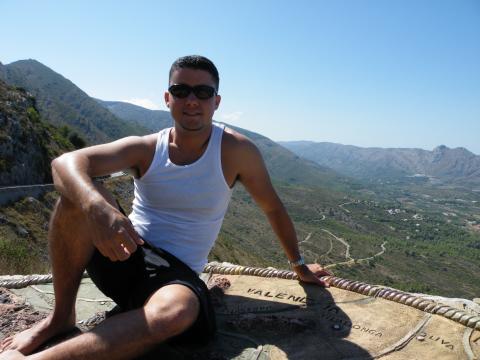 Moises Torrent is a Spanish-American 28 year old male who was born and raised in central Connecticut.  He was raised in the outdoors, and has always had an interest in the environment.
He received his BS from the University of Connecticut; major in Natural Resource Management and Engineering and minor in Ecology and Evolutionary Biology.  During his 4 years at UConn, he had many jobs including fisheries technician, GPS/GIS technician, and park aide for the Connecticut Department of Environmental Protection.
Upon graduation, he accepted a position at a large engineering firm as a land surveyor.  He quickly worked his up to survey party crew chief and worked there for almost 4 years.  For the past year, he has been working for a large environmental consulting firm as a GIS Specialist.  GIS (Geographic Information Systems) is cutting edge mapping software that he uses on a daily basis to create maps for reports and documents.
Moises loves to travel.  In addition to going to Spain every summer, he has been to South Africa and Ecuador.  With UConn, he had the opportunity to take a semester abroad in South Africa to study African ecology.  Last year, he was fortunate enough to stay at an eco-lodge in Ecuador for a week.  Not only did he get to eat some giant fire roasted grubs, but he was also able to volunteer at the local school. This nearly self sustaining lodge, in the middle of the Amazon, is a place he will never forget.
He spends most of his time in the outdoors exploring, hunting, fishing, hiking, and photographing wildlife.