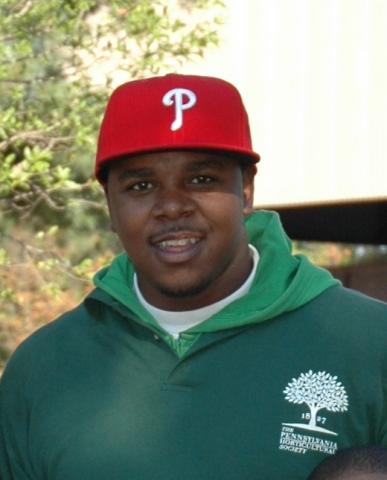 Travis Alexander is a Project Coordinator at The Pennsylvania Horticultural Society.  He's involved with a number of programs at PHS. One program named "Roots to Reentry" is a job training and placement program, which he is one of the instructors.  The Roots to Re-Entry program gives inmates at the Philadelphia Prison System (PPS) a chance to develop new skills, gain hands-on landscaping and horticultural experience, and pursue meaningful employment upon their release.
Travis also plays a major role in the Philadelphia Land Care Management Project.  Under contract with city goverment, PHS developed the project, which 'cleans and greens" neglected lots in key nieghborhoods across the city.  This includes removing debris and grading the land, as well as planting grass and trees to create a park-like setting.  He and his team works with 20 plus landscape contractors to see this work through.
As an ELP fellow Travis plans to advance his network of colleagues to learn from and collaborate on different projects that effects his region and to gather leadership qualities and techniques to empower others.
Travis, born and raised in the Logan neighborhood of Philadelphia, has recently become a father of a little girl named "Jada", does landscaping and garderning and is a mentor for youth interested in the greening industry.