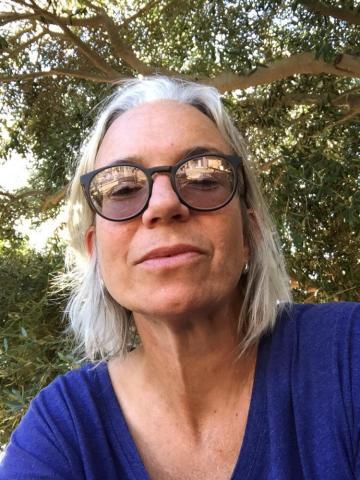 I spent my childhood hiking and skiing in the mountains in Colorado. My family moved to Philadelphia, as my teenage years approached, where I was drawn to wild places, tucked behind backyards and along railroad tracks, and, in the summers, along the Appalachian Trail and Delaware River. I attended art school in New York City and stayed to work in art and design, first in advertising, and then building a career as a designer at The Gap, Banana Republic. My moral compass eventually led me out of that work, and back west to Colorado where I married and took a year-long painting apprenticeship with a well-known artist. I became the mother of one, then two, then moved again, this time to California. I continued to work as a painter and even wrote a novel. I started an organization called Safe Energy Now to foment local opposition to sprawling new fossil fuel development proposed for my county. Then I took a job as a field representative for an environmental candidate's successful bid for the oil swing seat on our board of supervisors. Soon after that, our county issued its first denial of an oil project, set climate goals, and prioritized local renewable energy. When the 45th president was elected, I co-founded a social and environmental justice community group, focused on regional issues. Around that time, I quit painting took a position with ForestWatch to work full time as an advocate for public lands. There I developed an advocacy program and helped triple the organization's membership in two years. I was given directorship of this program, and I continue to work building it out. I try to find time to make stuff and build things, cook, grow things to eat, hike, ride horses, play in the snow, backpack, and do yoga.