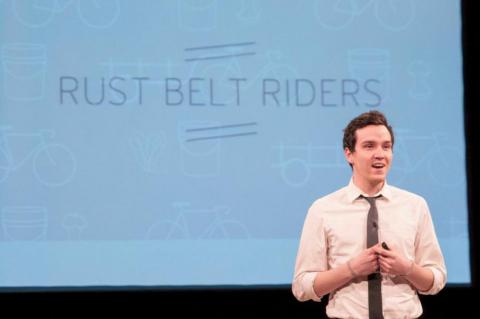 My name is Dan or Daniel, I honestly couldn't care less between one or the other. I am the middle child with an older brother and younger sister. I am a staunch advocate of Cleveland, love playing pinball, and basking in nice weather whenever Cleveland gets some. In the free time I muster up I am a huge nerd about food. I could talk about food in its various forms for hours at a time. I love cooking it, eating it, growing it and watching it decompose. I took a pretty huge leap in my young career not too long ago when I left behind a salary, benefits, and a 401k to become a full-time garbage man. I am not just any old garbage man though, I collect organic waste from Cleveland area residents, schools, and businesses and bring that to many of the over 200 community gardens around Cleveland - on bike! This, we tell ourselves, helps to advance and sustain local food systems here in Cleveland. I am also very interested in alternative business structures, hyper- local economy's, and above all: cooperatives.

Cleveland is a town that got the short straw in the era of industrialization - we are a hub of innovation, DIY, go-getter-mentality and I hope to bring that to the fellowship. My city has seen its worse days and is still going through some rough ones. Finding vehicles that support well-paying jobs, nutrition, public health, and ecology are hard to come by in any city - so I worked with a group of smart people to begin creating the types of jobs anyone would like to have and whose growth ultimately strengthens the communities they operate in. Through this work we hope people rediscover their inherent self-worth and connection to place.